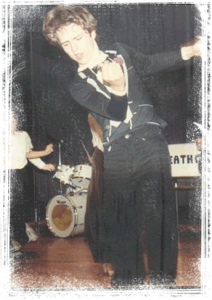 I consciously decided that I want to be a live performer at age 12 whilst watching The Tempest at the Stratford Festival in Ontario, Canada.

Watching Nicholas Pennell’s Ariel descend from the heavens blew my mind. It was then and there I knew that I was destined to be a stage performer.
Although, it might have been the hormones!
And the wings!

Three years later, at age 15, I won a Best Performance award at the finals of the Sears Drama Festival in a play that I devised from Shakespeare’s Romeo and Juliet, which I also directed and starred in.
As part of the festival our production was given a drama workshop with impro legend Keith Johnstone, the founder of Theatresports.

He introduced me to the Toronto Theatresports crowd where I formed an impro team called the Dumb Ideas with Barry Davis and Nick John.
Barry is now an Executive Producer on the Howie Mandel show ‘Howie Do It‘.

Nick is best remembered as Dwayne Dortmund of ‘The Red Green Show‘. Nick now works for the Second City Training centre in Chicago.

Around the same time, I taught myself to play bass guitar and eventually moved to the acoustic guitar as it was easier to compose songs with guitar as accompaniment.

I also started recording songs and sketches on a Fostex four track.

Thankfully, many of these recordings have been lost over the years. How embarrassing! 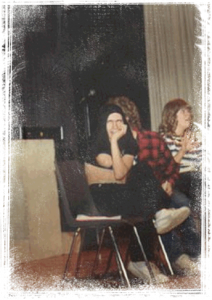 My first paid acting job was a year later, age 16, when I was cast in a tiny part in CBC’s Hangin’ In, a teen comedy set in a youth drop-in centre starring Lally Cadeau.

Top trivia fact – Keanu Reeves was one of the young actors in the series.

At 17, I was accepted into The School of Dramatic Art Bachelor of Fine Arts programme through the University of Windsor and trained as an actorfor four years.

I was lucky enough to be trained by the Lee Strasberg prodigy Bathsheba Garnett, who starred in The Guardian with Martin Sheen.

I also took workshops with a number of acting dignitaries such as Donald Sutherland, Peter Ustinov and much to my amazement Nicholas Pennell.

While at SODA, I became involved with the Gina Lori Riley Dance Enterprises,a contemporary dance company based in Windsor, Ontario.
I joined the company for two short American tours of a dance piece entitled Mabel: Two Nights at the Bowling Alley and I Can Do That.

No joke.
The show performed to thousands of people across North America culminating in a three day run at the Premier Dance Centre in Toronto.
Now you know where I get my moves from. Ha. 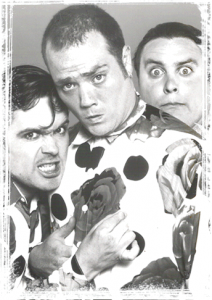 Whilst studying acting, I met funny-man Sean Cullen and together with a group of friends we presented a weekly comedy show on CJAM-FM, our campus radio station, called Last Laughs on Us.

Together we presented the mostly improvised comedy show every Monday for three years.

This was the basis of our launch into comedy when, at the end the school year, The Crystal Comedy Quest rolled through town and our radio team entered the competition as a musical comedy trio, Corky and The Juice Pigs.