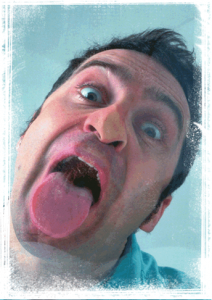 I continued writing my solo shows and was soon headlining comedy clubs across the country and around the world as a stand-up comedian. I also started pursuing open spots as a solo singer/songwriter, and in June of 2001, I was chosen to take part in the NXNE festival in Canada after entering a recording of my songs accompanied by Kevin Hearn of the Barenaked Ladies.

The project was called Feeble and was a critical success garnering a number of critic’s choices but I never felt my song-writing skills were strong enough to withstand the music business and that was the last time I performed those songs in public.

That same year 2001, my fifth solo comedy show Phil Nichol is Stuck was awarded the Spirit of The Fringe at the Edinburgh Festival.

At the same time, I was cast in Trevor Lock‘s critically acclaimed ‘What You Really Want” at the Pleasance. The production then successfully transferred to London. Trevor is a brilliant yet highly under-appreciated comic writer and actor and his play reinvigorated my passion for acting.

In 2002, I spent my life-savings taking Phil Nichol is Stuck to what was supposed to have been a trip to the Adelaide Fringe, Melbourne Comedy Festival and my first visit to
New Zealand.

However, the week before I left for the antipodes I broke my arm snowboarding in Milton von Keynes and spent the entire month with my arm in a cast! Needless to say the show bombed.

My run of bad luck continued when one day in Melbourne I received an extremely serious groin injury that ended the entire trip early and sent me packing back to London broken, broke and broken-hearted. 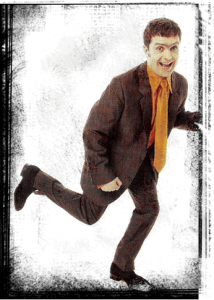 That hard luck story became the basis of my Edinburgh Fringe 2002 show ‘Things I Like I Lick” which received an amazing and surprising Perrier Award nomination.

The show involved Aussie musician Mick Moriarty and Canadian performance artist Shannon Cochrane who devised a different ‘surprise’ ending for the show each and every night.

In September of that year, I was given the Smirnoff Critics Award at the Smirnoff Comedy Festival in Cape Town, South Africa and was nominated for Chortle’s Best Male Circuit Comic. Thanks to Steve Bennett and Chortle.

Then, as the year ended, I was surprisingly cast in my first West End show, Boy George’s Taboo, playing the part of punk legend Philip Sallon.

I remained in the cast until it closed in February 2003 performing daily with Boy George.

It was an amazing feeling to finally be recognised as a stand-up comic and living up to my potential as a performer. I finally had put Corky firmly behind me and was ready to move onward and upward!

The year 2003 took me touring world-wide, winning the New Zealand Comedy Fest Spirit of the Festival award assuring my return the following year to possibly my favourite place to perform comedy in the world, Auckland.

The thriving comedy scene in Auckland and Wellington was a complete revelation to me as I met comic after comic who loved comedy and loved other comedians.
Comics like Dai Henwood, Rhys Darby and Ben Hurley to name but a few reminded me that comedy was supposed to be fun, first and foremost.

It was a huge learning curve and inspiration for me to be exposed to such a supportive and ultimately hilarious group of people.
Big up the Kiwis & special thanks to Scott Blanks and the Classic. 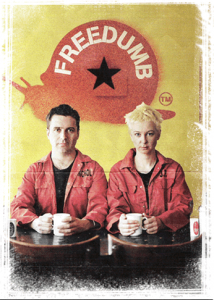 Later that same year, Owen O’Neill and Guy Masterson cast me as Juror 10 in a phenomenal production of Reginald Rose’s courtroom drama Twelve Angry Men for the Edinburgh Fringe Festival.
The cast was comprised of almost all comedians; including Bill Bailey, Jeff Green, Ian Coppinger and Steve Frost to name but a few.

It was widely acclaimed, winning a nomination for Best Ensemble at the Stage Awards and garnering the Strathmore Audience Award as the public favourite.
Working with that cast was one of the best experiences of my life. I would do it all again in a heartbeat as it reminded me how much I adored acting.

In February 2004, Twelve Angry Men was invited to participate at the International Festivals of Perth, Wellington and Adelaide and was presented in association with the eminent Australian company Arts Projects Australia to further acclaim.

Edinburgh Festival 2004 was an amazing adventure as I was cast as Charles Chiswick III in Ken Kesey’s One Flew Over the Cuckoo’s Nest along with some of the comedians from Twelve Angry Men.

Originally helmed by Guy Masterson, there were some backroom politics that sadly saw Guy step down.

He was replaced by theatre legend Terry Johnson who directed the show for the Edinburgh Fringe with Tamara Harvey and then into the Gielgud Theatre in London’s West End for an extremely successful sold-out six month run.

That Edinburgh Festival also saw me collaborate with the extraordinary comedienne Janice Phayre.

Janice and I both thought writing a ‘parody of a political satire show’ was a good idea. It was not. The show entitled ‘Freedumb‘ featuring a hapless couple bent on selling ‘Freedumb’ took a critical drubbing and we lost our shirts. I saw it as life’s way of keeping me humble.