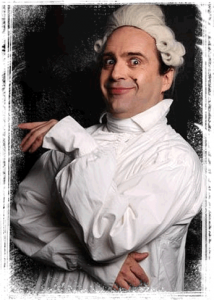 The Edinburgh Fringe 2009 was absolutely exhausting as my daily schedule entailed starring in the Comedian Theatre Company’s production of Gregory Burke’s brilliant first play Gagarin Way which Maggie Inchley directed at the Stand then skipping across to the Pleasance to play Joseph Surface in Cal MacCrystal’s hilarious take on Sheridan’s classic School For Scandal, scooting back to the Stand for my solo show and finally back over to the Gilded Balloon to host Old Rope with Tiffany. I spent most of my free time eating or sleeping.

My solo show that year was a character piece entitled A Deadpan Poet Sings Quiet Songs Quietly at my favourite Edinburgh venue the Stand 2. The show included the jazz backing of Mick Moriarty on double bass and Alex Silverman on piano.
A Deadpan Poet was tribute to little-known American performance beat poet Bobby Spade.
It was a collection of comic poems, songs and one-liners that illustrated Bobby Spade’s Oedipus complex that ended with the tragic demise of his mother and Spade’s subsequent suicide.
Big laughs, huh?
It rocked the critics and ended up being invited to the Melbourne Comedy Festival and Just for Laughs in both Montreal and my hometown, Toronto.

This would have been the first time that I would have ever performed stand-up comedy in Toronto. At the very end of 2009, film producer David Murdoch and writer James Charkow approached me to help them complete the screenplay for gross-out comedy thriller feature film Yinka and Dinka’s House of Hoax. David also asked me to direct it. 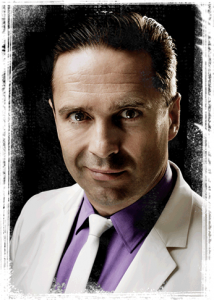 We had a small amount of money from Scottish Screen and set about casting
for a taster that we would film early the next year. 2010 came and I directed the taster for House of Hoax.

My DOP was Tim Wooster who was the cinematographer on indie hit The
Exam.
The cast included Gavin Mitchell, Daisy Haggard, Zachory Baharov, Jarred Christmas, Anna Crilly, Aisling Bea, Stephen Hagan, Thaila Zucchi, Tom Bell, and Waen Shepherd.
This was one of my best experiences ever. The whole thing was a treat and everyone was so generous, positive and supportive that I really wanted to get it made. Unfortunately, our funding fell apart with the liquidation of UK Film and House of Hoax is on the back burner for the time being. Anyone interested?
In the spring of 2010, I performed A Deadpan Poet Sings Quiet Songs Quietly in the main space of the Soho Theatre and toured the show to Melbourne, Australia where Alex Silverman was replaced by my dear friend, ex-Juice Pig Greg Neale.

Greg had a hand in the script along with Canadian comedian Glenn Christie so it made sense that Greg played the piano for the Melbourne run as he lives there. At this point we also started work on the next Bobby Spade show Welcome to Crazytown. Later that summer, I was preparing to take A Deadpan Poet to Just for Laughs in Montreal and Toronto when I was struck down with a painful debilitating skin condition called urticaria only days before my planned departure.

I was forced to cancel both festival appearances and was housebound for the month of July with a head full of anti-histamine, pain-killers and pear cider. It was in this condition that I set to work to re-creating Bobby Spade’s magnum opus Welcome to Crazytown. Welcome to Crazytown is an hour long poem/song that Bobby Spade wrote in the summer of 1974 whilst grieving the loss of his third wife Tamara to testicular cancer, which is very rare in women. 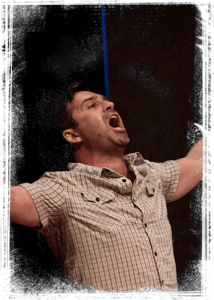 Described as a bleak, solvents-induced Under Milkwood, Welcome to Crazytown was only ever performed once by Bobby Spade at Bertha’s Jazz bar in downtown Baltimore.
That performance ended with the tragic death of Chad Theakston, Spade’s piano player at the hands of gangland mobster and spurned lover Ricky Tunatella. My mission was to recreate that event.

At the Edinburgh Fringe that year Maggie and I presented Itch: A Scratch Event each and every day at the Pleasance. We had some 150+ comedians join us throughout the run and developed a lot of scripts
and had a lot of laughs along the way. Each night, I performed Welcome to Crazyytown at the Stand One with a jazz backing band that included Jono Eio on piano, Phil Moriarty on clarinet/guitar/harmonica and his brother Mick Moriarty on double bass. With Eric Amber and Derek Florez playing Ricky Tonutella, the ganster gunman and Shecky Goldstein, the owner of Bertha’s Jazz.

The show was a blast and I believe it to be one of the best things I have ever produced as a writer and performer. That autumn, we recorded it live off the floor at the Premises Studio.
Thanks to Greg, Glenn, Mick, Phil, Jono, Eric and Derek for helping me make it possible.

Unfortunately, not many other people saw the potential for Welcome to Crazytown and outside of a handful of performances it has not seen the light of day. I was frustrated and slightly depressed that all that work was done for nothing.

But I took such pleasure in the construction of the show I wouldn’t change a minute of it.

2011 started with The Snowed In Comedy Tour, a five week comedy/snowboarding extravaganza that travelled across the Canadian provinces of B.C. and Alberta. It was here I realised that I wanted to return to the simplicity of stand-up for my next show and started writing accordingly. The new hour would be a stripped back solo stand-up show. No bands. No character. No overarching theme. Just simple fun, a simple hour.

While I started working on a monologue by Royal Court writer and comedian Dave Florez entitled Somewhere Beneath It All, A Small Fire Burns Still. Over the summer I started previewing my new stand-up show, The Simple Hour, when I was suddenly cast in a BBC 4 film about Monty Python entitled Holy Flying Circus.

Written by Tony Roche, Holy Flying Circus was a fantastical re-imagining of the controversy surrounding The Life Of Brian – specifically the days leading up to the now famous public debate pitting the Pythons John Cleese and Michael Palin against the Bishop of Southwark and Malcolm Muggeridge on Tim Rice’s 70’s talk show Friday Night, Saturday Morning.

I was cast as Terry Gilliam, the Python’s American member who is remembered best for his incredible animations and subsequent career as a visionary film director. We spent five weeks shooting it in London with director Owen Harris. The cast was made up of Rufus Jones, Charles Edwards, Darren Boyd, Steve Punt, Tom Fisher and myself as the Pythons with Simon Greenall, Mark Heap, Jason Thorpe, Paul Chahidi, Tom Price, Roy Marsden, Michael Cochrane to name but a few and finally a brilliant cameo from Stephen Fry as God.

What an honour to be part of that production. I loved every minute of it. Thank you so much to all involved.

That August, the Edinburgh Festival was a fantastic one. The Simple Hour played to rave reviews and sold out houses. Dave Florez’ Somewhere Beneath It All won a Fringe First in the very first week at the Gilded Balloon. This was the Comedians Theatre Company’s first Fringe First and the first of many I hope.

And finally Matthew Osbourne’s Cul-De-Sac garnered a sold-out laurel from the Fringe Society for selling every single ticket across the run at the Pleasance. Well done Maggie.

We saw Cul-De-Sac transfer to London’s  Theatre 503 for a sold out run and rave reviews.