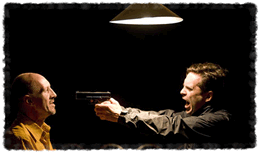 Theatre director Maggie Inchley and I formed the Comedians Theatre Company in 2006 after working together on an award winning production of Edward Albee’s The Zoo Story the previous year.
The remit of the company is to put stand-up comics, improvisers and character comedians into works of theatre and to give the performers a chance to expand their base skills in acting, writing and directing for theatre.

Stewart Lee kindly helped launch the company at Edinburgh Fringe 2006 directing a critically acclaimed production of Eric Bogosian’s Talk Radio (left).
At the same time Maggie directed Sam Sheppard’s True West at the Assembly Rooms.
Since then, The Comedians Theatre Company has worked with all the major Edinburgh venues to produce high quality fringe theatre. Productions include remounts of Killer Joe, Breaker Morant, School for Scandal, Gagarin Way as well as original productions Cul-De-Sac and Somewhere Beneath It All, A Small Fire Burns Still  (which won the Fringe First Award, 2011).
The company also began the Itch: A Scratch Event new writing platform in 2009 (See below).
Visit the Comedian’s Theatre Company on facebook, here.