The Naked Racist was my tribute to pacifism.
It was the 2006 follow up to Nearly Gay and it recounted an incredible wonky night in Amsterdam which ended with full frontal nudity and a new perspective on racial harmony.

Again at the tiny Stand II, the show included a full metal band, The Shitsticks, that included Ossian Richie, Richard Creek and my soundman Jerry DeSousa and a group of hippie dancers made up of Pappy’s Fun Club, Phil Kay, Janice Phayre and whoever else we could convince to dance naked at the end of the show in the name of peace.

This show was absolutely brilliant fun and ended up being chosen for the inaugural If.comeddie Award, which was formerly the Perrier Award albeit with a new sponsor and a silly new name.
The award has since been rebranded again as The Edinburgh Comedy Award which kind of makes me the George Lazenby of comedy award winners.
You can now get this show on DVD, buy at Amazon, here – or download on iTunes here. 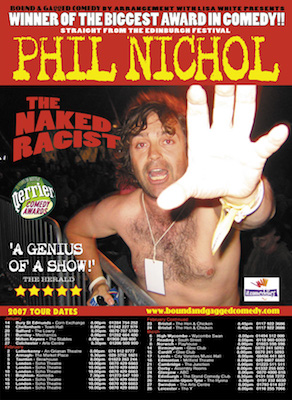