A Deadpan Poet… saw me heading back to my favourite venue the Stand II in 2009. The smaller venue allowed me to experiment once again and I took full advantage. With the help of writing partners Greg Neale and Glenn Christie I successfully attempted to fuse one-liners, poetry and jazz.

The show was a tribute to little-known American performance beat poet Bobby Spade and illustrated Spade’s Oedipus complex that ended with the tragic demise of his mother and his subsequent suicide.

The show included the jazz backing of Mick Moriarty on double bass and Alex Silverman on piano.
It rocked the critics and ended up being invited to the Melbourne Comedy Festival and Just for Laughs in both Montreal and my hometown, Toronto.
It also transferred to London for a ten day run at the brilliant Soho theatre where Rich and Damian Coldwell replaced Mick and Alex.
In Melbourne Greg Neale replaced Rich on piano. 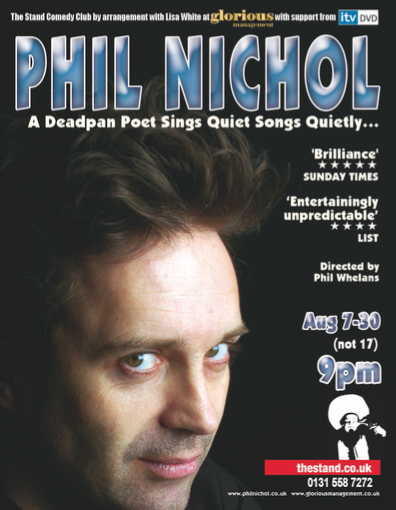